Posted by Gillian Philip on 19 November 2013. No Comments so far.

Thanks to the gorgeous people at Tor Publishing, I had a chance to do some rewrites on BLOODSTONE before its publication in the US (today! The 19th!). One thing I wanted to do was take Seth to a war zone (how unlike him, I hear you say) to see him encounter a certain character – one who’s going to have a bit of an impact on his life. But the prologue isn’t in the UK edition! So I’m reproducing it here for British readers – and thanks to the sage advice of Hugh ‘Shuggie’ Fulton, who was once my own section leader when I was a not-very-competent soldier, and was latterly an OSCE election observer in some dodgy old trouble spots. It’s not the first time he’s come to my rescue. *Ahem*

So to celebrate Publication Day in the States, here it is – Bloodstone’s new prologue. Keep your head down, Seth – you’ve been somewhere like this before… 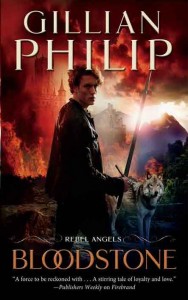 The man I was going to kill had strikingly beautiful eyes. I could see them in the magnified sight, warm and honey-brown, reflecting the flames from the blaze in the mini-mart.

My shoulder was hard against a parapet: not stone this time, but pockmarked concrete, the dust of it hanging in the air from the last artillery bombardment. Down below me on the pitted road lay a bloated red dog, legs stuck out rigid, like a toy some child had knocked over. Beyond the high-rise flats, half-eaten by shell fire, rose dry golden hills, hovering in the haze of summer warmth, pretty and distant.

He isn’t the first to die here, and he won’t be the last.

Something cold trickled through my veins and nerves, stiffening my muscles, and my finger trembled on the trigger. Witless reflex. I clenched and unclenched my fist, relaxed. I tweaked grit out of my eye and blinked into the sight once more.

He’d moved. He’d jumped down from the personnel carrier and walked behind it, snapping an uncooperative plastic lighter at his cigarette. A militiaman shifted between us, an RPG launcher slung over his shoulders. That one was human.

The one who followed him down from the cab, the one with the Zippo lighter? It wasn’t.

Bloody hell, had four centuries turned me into a full-mortal? The thing was as human as I was. I was a twenty-first-century Sithe; at least, I was these days. What should I call it, then? Differently-evolved.

I swallowed. This didn’t explain everything about the man in my sights, but it explained a lot. It wasn’t as if full-mortals needed a personal Lammyr to encourage them, but hey, carnage could always be worse if a man used his telepathically-enhanced imagination. The Lammyr’s stained and punctured beret, scavenged off some corpse, was tilted at a rakish angle. This one had style. I watched it flick its scrawny thumb on the lighter wheel and offer up a dancing flame to its titular captain.

I wondered if the man with the beautiful eyes had a brother who loved him: a brother with a head for heights and a good shooting eye. A spot between my shoulder blades started to itch.

Get out from behind that truck, you inconsiderate sod, and give me a chance.

I mean, it’s nothing personal.

He’d got his cigarette lit, at least. I was happy for him. He sucked on it and blew smoke into the afternoon air. It dispersed, drifting with the dust of shattered buildings.

I wondered if the old woman in the headscarf had been something personal. I hadn’t looked at her for a while but I knew she lay on the edge of my vision, spraddled without dignity in the middle of the road, face lost in a dark stain of blood, hand still outstretched to her fallen shopping trolley. No, I doubted it was personal.

Another Jeep rumbled into the deserted street, kicking up dust clouds, and militiamen climbed out of it, swinging weapons like they were designer bags. The man with the cigarette laughed, shouted to a colleague, pointed at the far hills.

Come out, then. Or somebody move the truck. I want to go home.

You can’t go home, whispered the voice of reality. If you could go home, you wouldn’t be here.

I drew a breath, sighed it out. More than a decade since I’d been to my real home. Centuries since I’d had a chance to live there. This was not my war. My war had been on hold for a long time. It waited for me beyond the Veil, with my lover and my friends and my best of enemies. It waited in a world beyond a Veil that hadn’t died yet, but that grew more shabby and threadbare with the years. My queen had sent us into exile, me and my brother and my beloathed family, and if we didn’t find her precious Bloodstone in the next couple of decades – the one that would determine the Veil’s fate – I could see Kate getting her way without it. I could see the Veil dying of its own accord, and my own world dying with it; I could see this wretched otherworld having to be mine forever.

Maybe I liked this war better. Maybe that went for all my full-mortal wars. Because they were nothing personal.

Anyway, at least the old girl with the headscarf had gone fast, with a sniper’s bullet to the head. In my sixteenth-century day, she’d have been toasting on that fire in the mini-mart.

The captain was striding towards a group of his fighters now, throwing down his cigarette half-smoked and grinding it thoroughly with the toe of his boot. Which struck me as hilarious, given that half the town was in flames. I brought the stock back to my shoulder and found the sweet spot between his beautiful eyes.

‘Are you out of your mind?’

It was said on an indrawn breath, right behind my shoulder. I cocked my head round and lifted an eyebrow at O’Dowd.

‘No, sergeant. Right inside it, sergeant.’ And yours, if you only knew it.

‘How did you get here? I didn’t even notice you were bloody missing.’

You shouldn’t even have noticed now. Who was your great-great-grandfather, Tam fecking Lin? ‘I, uh…’

‘Bloody well back off, MacGregor. Unless you want to cause an international incident.’

‘You’ll have to give me a minute to think about that.’

‘No I won’t. You have rules of engagement and this doesn’t fall into them. Back off. Now.’

‘He’s a mercenary psycho. And he’s hanging out with a––a…’  Right. Explain that to the sergeant. ‘Another psycho,’ I finished lamely.

‘Let me spell this out for you, seeing as I’ve had my ear bent right off by the lieutenant. That bastard down there? His best mate is the future PM’s favourite warlord. And the future PM is going to sign that ceasefire agreement on Thursday.’

‘I’m dead impressed with your grasp of current affairs, sergeant.’

‘It’s irrelevant, MacGregor. This is the relevant bit, right? We are not here to get involved in firefights. Now back the feck off.’

My finger itched, but I couldn’t do it now. I’d blown my chance. I turned back to gaze longingly at my target, standing in full view now in his dust-and-blood-spattered fatigues, the sun on his red-blond hair and the crinkle of laughter round his warm burnt-sugar eyes.

It pulled off the beret, ran skinny fingers through its strands of hair. Lazily it tilted its head up, to the sun and to me.

Its yellow eyes creased and it smiled. I knew I’d lost, this time. So I smiled back.

I wished I could have killed Laszlo. But even though I didn’t like him, it wasn’t as if it was personal.

Not in this world. Never personal.