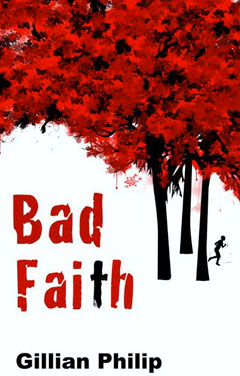 “Before I slipped on the mud and fell over the Bishop, our family didn’t have a lot to do with murder.

A little, but not much…”

Life’s easy for Cassandra. The privileged daughter of a cleric, she’s been protected from the extremist gangs who enforce the One Church’s will. Her boyfriend Ming is a bad influence, with infidel parents who are constantly in trouble with the religious authorities. But Cass has no intention of letting that drive them apart… until they stumble across a corpse.

What killed him? How did his body end up in their secret childhood haunt? And is this man’s death connected to other, older murders?

– Susan Price, author of Feasting the Wolf and Odin’s Son

‘Secrets that lurk in the family’s past are gradually revealed by Philip with consummate skill… Thematically and atmospherically Bad Faith recalls the early work of Kevin Brooks, a name I mention with due care, since I am eager to convey how very good I think this novel is; those who know my reviewing will know how highly I rate Brooks’ work. After I had finished it, I looked on Amazon to see if there were any reader reviews. There are (as of March ‘09) eight reviews, every single one of them 5-star reviews. So I am not alone by any means in thinking this a first-rate, five-achukachick read. I urge you to hunt it down.’

‘Gillian Philip creates a believable and chilling ’dystopia’ where some of the action is not for the faint-hearted, but the pace will keep readers moving on…. A compelling tale.’

‘This is, dare we say it, an important book… Bad Faith is a very clever satire, written with pace and humour and wholly deserving of a wider audience… Ms Philip wields her “pen” with a deft and surprisingly light touch. Never preaching, allowing her characters to perform their roles within… a tightly constructed plot. All of life is here; family secrets and delusions, a state-sanctioned serial killer called Holy Joe and a disconcerting demonstration of what might happen if fundamentalism were ever to overtake these shores.’

‘One of the most talented novelists to emerge from Scotland in recent years… By any standards whatsoever, this is a mature piece of work and whatever your age, you will not be able to put it down. From the first astonishing lines to the unbearably poignant ending, the story fairly gallops along, polished, satisfying… Philip manages to combine lyrical writing about adult themes, absolutely believable characters and real dialogue, with a breathtaking switchback of a plot, by turns funny, moving and terrifying, that will have you reading on the edge of your seat. When you start it, remember to schedule in a good chunk of your time. Bad Faith will sweep you along and have you hoping for a sequel. I finished it in the early hours and spent the following day bleary eyed, and wondering exactly what had hit me.’

‘A gritty storyline, complex characters and a chilling atmosphere makes this harrowing story a must-read.’