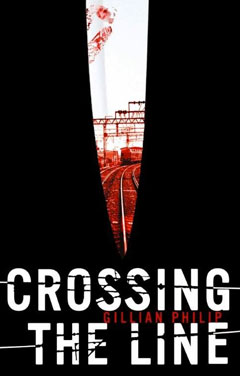 Nick Geddes is the loneliest thug in school, but that’s not entirely his own fault. True, he should never have thrown in his lot with the homicidal Kev Naughton in the first place, but he’s trying to live down his past.

It isn’t his fault his mother is a New Age hippy chick with a mortifying god-slot on local radio; as far as he knows it isn’t him who drives his father to drink. Nick isn’t the one who hangs out shoplifting with an imaginary friend: that’s his deranged sister Allie.

Worst of all, the girl he loves hates him with a passion, and that’s understandable. But it wasn’t Nick who stabbed Orla Mahon’s brother to death with a kitchen knife…

Longlisted for the Carnegie Medal 2010, Wirral Paperback of the Year, and the North Lanarkshire Catalyst Award

Reviews for Crossing The Line

‘An uncompromising exploration of the ruthless Darwinian world of teenagers. It’s tough, rough-textured and assured, cynical where it needs to be, and demands respect.’

‘Much more than a morality tale about the danger of carrying a knife to defend yourself … much witty, well-observed detail.’

‘This is a love story. And it’s funny. You have to keep that in mind… it’s wonderful how Gillian Philip can keep both observations and dialogue quite so humorous, considering the gruesome subject.’

’Expertly characterised and grippingly plotted, Crossing the Line is a timely novel by a remarkable new voice in teen fiction. A realistically voiced modern novel of the consequences of knife crime, the narrative flips easily between flashback and present day… flows easily and naturally and keeps the reader turning the pages to the end. ’

‘Beautifully written from Nick’s point of view… for all his surly ways, he is immensely likeable. His character is handled with ease and his emotions are explored with great sensitivity. There is also a lot of humour, some black, some wry and some laugh out loud funny. It takes a very talented author to broach a topic such as knife crime and tell it from the point of view of one of the perceived baddies.’

‘A chilling read… should appeal to fans of Kevin Brooks and Rachel Ward, or to anyone who likes their fiction to be realistic and believable.’

‘Fiction for teenagers often tries too hard to protect or lecture its readers, with sanitised characters and everything rounded off into a neat anti-drugs or anti-sex moral. It’s very rare, and exciting, to find a writer like Gillian Philip, who understands that adolescents are actually capable of sexual feelings and huge, true emotional understanding… a tender, touching and emotionally savvy examination of sibling relationships and adolescent angst, the taut thriller plot balanced by the problems of getting gorgeous Orla Mahon in the sixth year to even notice you exist. Philip’s grasp of schoolyard politics and power-plays is dead-on too, taking older readers kicking and scowling right back to the playground.’