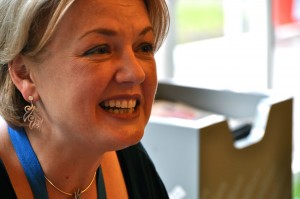 So that’s me on the beach. (The weather here in the north-east Highlands of Scotland is always, of course, stunning.)  I live here with one husband, two children, three dogs (Cluny, Milo and Otto), two psychotic cats (the Ghost and the Darkness), a slayer hamster (Buffy), umpteen chickens (including Mapp, Lucia and Honey Boo Boo) and a lot of nervous fish. I have taken a solemn vow not to get any more pets. I will probably break this vow.

Writing for a living is (a) what I always wanted to do; (b) occasionally frustrating; (c) a lot of fun – I take dictation from the characters in my head, who spend their lives telling me what’s going to happen next.

But I like it that I never know just how it’s all going to end – not till the fat lady sings, the villain meets a suitably sticky end, and the boy gets the girl (or indeed the boy).

My Scottish historical-to-urban fantasy REBEL ANGELS series has just been brought out in the US by Tor Publishing (having been published in the UK since 2010 by Strident). FIREBRAND appeared in the US in February 2013. BLOODSTONE, Book 2, is due out in November, to be followed by WOLFSBANE in the spring. And the final episode – ICEFALL – is now sitting on my hard drive (and all that leaking blood is doing nothing for my laptop). I know who lives, I know who dies, I know who wins and who loses everything… and you can find out in autumn 2014, when ICEFALL will appear simultaneously in the UK and the US.

As well as my own novels, I ghostwrite fiction for several companies including the renowned Working Partners – I’m one of the Erin Hunter team, writing SURVIVORS, and I regularly tour the US to promote the series. I also write MYSTERIES OF RAVENSTORM ISLAND, and have written as Adam Blade on BEAST QUEST. For a different company I’ve been Gabriella Poole (DARKE ACADEMY).

Oh, and I write short fiction, too, for for secondary Key Stage 3. LIFE OF THE PARTY, MIND’S EYE and SEA FEVER have just been republished in gorgeous new covers by Ransom Publishing, and short stories THE CHANGELING and MISTY appear in their sci fi and ghost collections. CYBER FEVER is shortly to be published by ReadZone Books, along with short stories ROCKFACE and THE KINDEST CUT.